In 2011 the Martinez family moved into their newly constructed Habitat for Humanity home.

Finding out they were selected, then going through the process of building their home, selecting finishes, working on the floor plan was life changing—and continues to have a positive impact on the family.

Rene and his wife Esther applied to become Habitat homeowners around the same time Rene applied to a  master’s program. A bout with cancer kept him from entering the program but they were able to put in 500 hours towards building their home.

Rene completed treatment, applied again to a master’s degree program and the family of five moved into their Fox Hollow (Edwards) home. “I was trying to pursue my masters in 2010 at same time I was diagnosed with cancer; one (result) was bad and one was good, God works in mysterious ways,” says Rene. 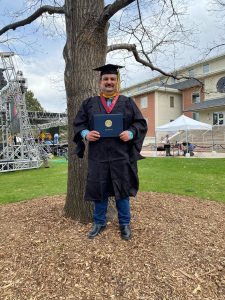 It’s his calm demeanor and willingness to continue persevering that contributes to being a successful, productive community member. Before he could start his master’s degree, he had to take several classes to qualify. As he took steps to extend his education, his family also set goals.

“We have set more personal goals. We feel that Habitat is a trampoline for success if you plan and organize yourself,” he shared a while back.

The proverbially trampoline launched Rene and his family—everyone is doing better and “catching up with life.” They’ve set—and obtained—goals. “Making true the American dream is the best reward in life for all families,” Rene says.

The Habitat home allowed the children to soar: Frank, Mariana and Evander participate in sports and have more space for homework, projects and room to play.

“It’s more than building houses. It’s a place where homes are built and dreams come true. It’s where relationships are built for a lifetime,” Rene reflected.

The Martinez family continues to keep studying, save more, make a lifestyle of better quality and build a better community—all thanks to housing stability found a decade ago. 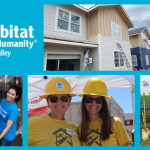 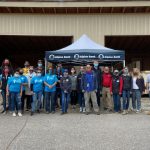