A local couple, Joan & Robert Willoughby, inspired by former President Jimmy Carter’s long-term commitment to Habitat for Humanity donated a truck and camper to the Habitat ReStore in Eagle on Wednesday. They valued their donation at $10,200.

Last Friday, a day after being hospitalized for dehydration, former President Carter returned to pound nails on a Habitat for Humanity worksite in Winnipeg, Canada. Mr. Willoughby cited this recent event as the motivation for making his donation. Yesterday, when he walked into Eagle’s ReStore, Robert handed the keys to his 1996 Chevy Silverado to the ReStore Director Craig Colby and stated, “I can’t pound nails anymore, like President Carter, but I can do this.”

The twenty-one-year-old Silverado has 103,336 miles and the Lance long-bed truck camper is complete with a generator, bathroom and kitchenette. The ReStore will sell the items separately, or together as a package, and the sale (like all sales at the ReStore) will help fund the construction of Habitat for Humanity homes in our local community.

“You don’t have to lift a hammer to support the work that Habitat for Humanity is doing here in Eagle County,” said Elyse Howard, Development Director. “You can also support our homebuilding efforts by shopping and donating items to the ReStore.”

The Habitat ReStore receives donations on a daily basis, but more typical donations include furniture, appliances, building materials and housewares. Since 2005, Habitat Vail Valley ReStore has raised more than $1 million in funds to support the home building efforts of Habitat for Humanity Vail Valley. 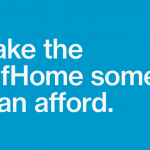